I’ve ridden around Australia :) About 26,000km around the mainland, not counting my foray into the centre, two-up with Bertie after I threw my chain / while my bike was getting fixed (dotted on the map below); or the week we spent riding around Tasmania together (on two bikes) last February when I was still on my L’s. Here’s My Great Motorcycle Ride of Australia – the bits in pink. The highlighted towns are where I stayed the night, the orange is not mine, it came with the map 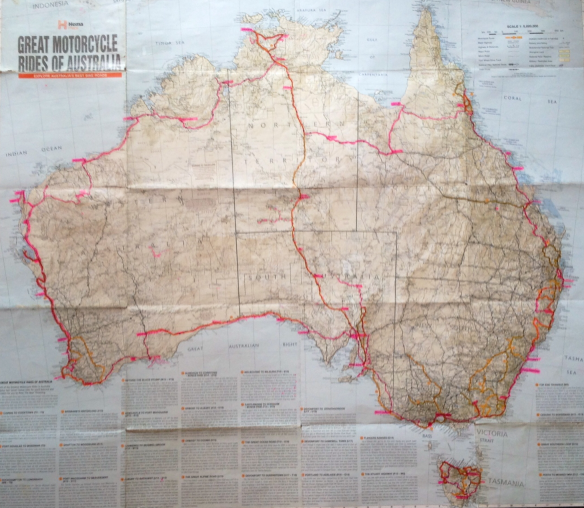 I took 83 days +7 for Tassie. I wish I had taken a whole lot longer, and would leave again in a moment if I could. No complaints. But I do hope I get to do this again soon – if not around Australia in the immediate, then adventure rides through Europe and Scandinavia, closer to my new home.

My last day started with a flat battery, which was dealt with quickly as soon as I found someone with jumper leads (the second person I asked). Campsites are generally good for that I should think, but it’s not how I want to have to start my bike every time. Once packed and on the road, Bertie and I swooned off around the delectable Victorian Alpine curves to Omeo and then Bruthen, where we stopped for breakfast, leaving my bike running across the road in the shade, sounding disturbingly like an Asian sweatshop, at the same time comfortingly like the small sewing machine factory that my dad had when I was a little girl (as he moved onwards and upwards from the coal mines, coke factories and steelworks he inhabited when I was really young). After breakfast, we refuelled (my bike still running) then headed off, back to Hotel Port, our lovely home in Port Melbourne, which I only just moved in to before making this trip, and will leave in a week’s time for a moment, then permanently not much longer after that. I’m moving to house #99… then, when Bertie comes over, house #100. Hopefully we’ll be in that one for a while…

The roads I travelled today were all familiar. I cut off some of coastal Victoria because I’ve done it before, I had timing issues, and how can I do this trip without at least a little of the Alpine roads? So I swapped edge-hugging pedantic-ness (& discovery) for sheer riding pleasure and joy :) seemed fair enough to me. I wasn’t expecting too much from the motorway once we got on it, but that was lovely too – just the fact that I was speeding towards home brought a certain exhilaration, and I loved seeing the Welcome to Melbourne sign, though my helmet cam had died by then so I didn’t get a photo. It didn’t matter.

I had thought I would like to turn off the highway and ride around Port Phillip Bay, but I was enjoying the ride so much, zooming in to the city and towards home, that I stuck with it. There’s a lovely sweeping overpass and a short ride along the river, which is very, very nice, then the ride past BMW Southbank, where my bike was born, then when almost home we did a little sweep along the bay, ending at our little beach from where we get a perfect view of the Tassie Ferry – our ride to Tasmania, five minutes from home.

It doesn’t feel monumental, as it was bird by bird, step by step, ride by ride, but it was a wonderful thing to do and has changed me indelibly. I worked while I rode sometimes, which was hard, but if I could just keep going I would :)

Some pics from the end of my ride. I think I love best my smile at the end, as it encapsulates it all. Bertie was with me for the three weeks at the beginning, as far as Adelaide and up to the centre and back. Two months later he met me in Bruthen to do the very last bit at the end. Without him, this trip would never have happened – I probably would never have explored my latent desire to ride a bike. I’m lucky and grateful and feel calm and fulfilled, and, as Bertie said to me when I asked him 18months ago, after he had done his ride: I’d do it again in a heartbeat. You’d better believe it.