Today I was excited to get going. I had some home-made yoghurt (yum), and some farm eggs with avocado and asparagus, fresh from the garden. I have to say, those chooks do themselves proud. Amazing eggs. Amazing everything.

Pumped up, packed up, fuelled up and ready to go. I loaded up the bike and said my goodbyes and discovered to my dismay that my battery was flat again. Again. This is the second day in a row, and this time I am absolutely certain that the steering was locked and the bike fully off, and the GPS turned off too – mum watched me turn it on to put in Bruthen…

Well, I know how to fix this, so it’ll only delay me five minutes, or so I thought, but mum and T don’t have jumper leads (!). It’s a bit surprising, but there it is. I had to call Roadside Assist again. This time they took less than an hour to arrive, but I’m meeting Bertie in Bruthen, I haven’t seen him for two months and now I’m going to have to wait a little more :/ :) :?

I fuelled up in Bega and the bike restarted reluctantly. Hmmm. This is not really ideal. The GPS has been a bit weird – turning itself off when I go over bumps, things like that. It all pointed to a short-circuit, so I turned it off completely and it kept turning itself back on! omg. well, at least I think I’ve identified the problem. I got to Bruthen, turned the bike off and on again, and it started very reluctantly, so I left it running, and kissed Bertie hello. So much for a relaxed lunch together. Bertie set to, opening up my bike, disconnecting the GPS from the battery (which is actually under the tank bag – where the petrol tank would typically be), I had a salad and a tea and we left my bike running while throughout, as well as while we refuelled. Someone at Anglers Rest would have jumper leads, we were going camping for my last night on the road, having dinner at The Blue Duck Inn, and getting there via some of the most glorious twisties in Australia (Bruthen to Omeo and Omeo to Anglers Rest)

so that is what we did. Here’s the Blue Duck Inn at twilight, seen from the road to the camping area, via the river where you can apparently catch fresh snowy mountain trout (there wasn’t much water in it, but there were lots of little jumping fish, which was very cool):

and here’s our campsite. two tents on our last night together all those kms ago in the Adelaide Hills, and two tents for our first night together 2 months and 25000kms later, in one of our favourite places in Victoria. Sleeping together would have been nice, but this was nice too (mine is the seemingly large and luxurious blue tent, strategically attached to Bertie’s bike. Bertie’s is the lime green pea pod) :

first stop for fuel, Appollo Bay.
my beamer didn’t need any, but after visiting the Caltex for Bert and topping up my beastie so we are at the same place, we stopped at Cafe 153 in Apollo Bay for a fancy green tea, an extra hot skinny flat white, and some reflection on the day ahead. 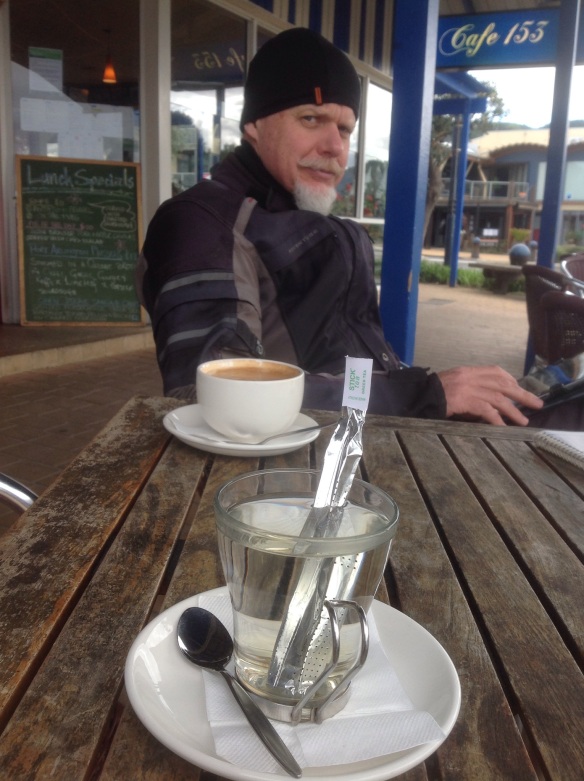 short stop to see the Twelve Apostles, we could only count eight though!:
Here’s Bert, to prove we were there (I’m still a bit reticent to put photos of myself here):

and some nice pics without us:

and just in case you didn’t think cliffs could be dangerous:

after that, another short stop in Port Campbell. I wish I took a photo. it’s beautiful… but I didn’t. instead I wrote this from Warnambool, which is not so beautiful, sadly… it’s not ugly, don’t get me wrong, it just isn’t quite as breathtakingly distinctive as Port Campbell. It feels like “just another town”.

We got to Warnambool via some glorious twisties up through Cobden, and from here we’re heading to Mount Gambier if all goes well.. Have to get there before the roos come out. I saw one somewhere along The Great Ocean Road… it was bigger than me and would have done serious damage if I’d even survived. Sadly for him/her s/he was having the long sleep after colliding with a much bigger vehicle than me : /

at Mount Gambier now. Writing, as usual, at the crack of dawn : )
I used the Drift Ghost S (my helmet Cam) for the first time yesterday. Not sure yet if I’ll upload video. Need to think about size, time and editing content.. (haven’t looked at it yet, though I probably should : ))
sadly, I stopped using it at Warnambool. I wish I had it on as we left Victoria and crossed through the radically changing landscapes into South Australia..
First, we had The Princess Hwy, which at one point was an unmarked and unlined (fortunately bitumen) road through forests, before it widened out just a little. Then, immediately after the “Welcome to South Australia” sign, we were confronted with strikingly uniform pine plantations set back from both sides of the road, guarding what looked like dark shadowy worlds. Quite surreal. At this point the roos started to emerge for food (fortunately the set back was significant, though we had to be super alert). A little later I saw a really strange area on the left, just before we reached Rennick – it was like a giant swamp or lake but the ground was all like red-brown froth, with the occasional clump of trees and also a few bits of dead tree detritus… also quite surreal… no images, sadly, had to get to Mount Gambier before the roos got us. Lucky for us we made it.

as I write this, it’s technically day 2. I was up at the crack of dawn as usual. so here is a recap of yesterday:

at Port, ready to head off

at the entrance to the great ocean road (you can see how modestly I’ve packed! just a roll bag a tank bag and the two panniers, which are mostly full of camping gear):

at the Lorne Pier – my first stop further West than I’ve been before:

and this one is Bertie on the pier (he looks a bit like an alien. it was cool we could talk to each other through the intercom, like visitors from a foreign land):

and the view from the Wye River hotel this morning. Sadly I missed the sunrise – it’s supposed to be the best view from a hotel in the whole world : ) I’m sure some people might argue, but it’s very beautiful… (my photo doesn’t do it justice)

so, to go backwards, yesterday I had an amazing and unexpected surprise.
I had taken my bike into Southbank Motorcycles, in Melbourne, where I bought my bike and have it serviced and the guys there look after both me and my gorgeous beast – they set up the TomTom GPS and fitted a bashplate for me in case I end up going dirt or running over a tree or something (right).

when I picked up my bike, I thought that connecting the tomtom to the electrics must have caused everything to reset, ’cause the clock was out and the trip meter was on zero. but when I went to fill up yesterday, heading out onto the freeway, I discovered that the tank was already full!

What a totally cool way to start my ’round Australia ride, with a full tank compliments of Southbank Motorcycles! The guys there are amazing. They always go above and beyond and they are all such nice people.

The bike is a bit heavier than usual as I’ve brought camping gear with me, but it’s handling well. The twisties beyond Lorne to Wye River were especially joyful. Bertie thinks I will hardly use the camping gear, but as I wrote in a previous post, I’m quite determined.

Our choice to head first for the Great Ocean Road was a good one, but I felt like I was finally on my way the minute we rolled out of Lorne – further West than I’d ever been before. I smiled like crazy and punched the air with elation. Then we pulled up at the Lorne Pier, where we shot the above photos.

A nice aside, at the Wye River pub, the young guy behind the bar is in love with Sweden and would live there again in a moment. He also rode his bike with his Dad from Australia to Scandinavia and Europe over 8 months, and says he is nicely jealous of my ride and my new job. So nice to have instant connections/correlations. The universe seems to be agreeing that I’m on the right track – I’m moving to Denmark in the new year (start date Dec 1, but some back and forth over Xmas), and I’m on an amazing motorbike ride of discovery around my great big multi-coloured land

: ) as W said yesterday, the ducks are all lining up after all the hard work. I’m very happy.